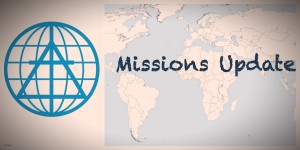 First of all I would like to thank everyone who prayed for our mission trip. It is joy to see when God’s people come together for His work and pray.  This trip was very exciting and filled with much fruits. We visited several households and shared good news with those families. My colleagues Shik described current situation   “There are ears to hear”. I agree with him I have not seen in my last couple of year’s work when the door open like this.

Anyway we stayed with clan leader M. and his family for 3 days and nights the rest of days we stayed with K. one of young believer.   In total we shred good news with 10 families. Our plan was to teach 7 families but God multiplied. I have so many stories for you, the first day of our stay with my uncle M. family one of his wife, his son and wife and 2 of his sons were learned about J. (I Have attached their picture) The clan leader M said “I am not sure what I can do to share a Gospel after this because of my old age and can’t walk to see many people but I will encourage my own family to follow His way and I will keep J. in my heart forever”

So, my colleagues and I explained very well about the dream he had and specially telling him the largest book he saw was assurance of salvation. It is also clear that the man was J. K’ said “I want to know more about him” Please pray for K and his family and his two brothers and wives and children too.

Another story an old man his name is Ali he is in his 60th. His son is following J in secret and his son Ab sponsored by Into All the World (IATW) by Desert Child sponsorship program in district town learning at secondary school. Anyway we visited the father of this young man and we had a great time with him. Every time we shared a word of God with him he says” Malab xaqale yaaba!” mean  “This word tastes like honey” colleagues and   I read to him from the scripture exactly what he said was it is in Bible. He was really amazed!  Finally we asked him to repent his sin and he lifted his both hands confessed his sin. It was very exciting day for us to see all of that. After we finished the prayer Ali says “My wife is not home right now she took goats for the grazing but if you around please come at evening and share the same word with my wife too” Please pray for Ali and his family to grow in their faith.

3rd story my  colleagues and I walking in village visiting some of families that we wanted to teach and suddenly  met the village Muslim teacher on the street . He is the Imam overseeing the entire village and his name is Jacob. Whenever I visited the village I have never stopped at his house because I was afraid I assumed he might not happy with what I am doing?  But the truth is completely different.  Jacob when he met us on the street he said to us  I know you guys visiting people’s house but why not you come in to my house. That was big surprise! Well my friend and I said sure we can come and went the same day to see him at his house? . Wow!  He continued his speaking to us and said “G you don’t know how much I supported you on what you doing? Even during a trial 2 years ago I was protecting you in many ways. The local government and radical’s wanted my signature to say that you are converting people into Christianity but I refused. In several ways some people wanted my approval to kill you and put you in prison but I have not seen any bad things from you and said no. But he says you never visited me ones even, I know you sharing about J with our people and I am OK with it.  I will never stand against you regarding this he says.

Suddenly I start weeping, I didn’t know all this stories. I didn’t know this man was protecting me in this way and always skipping his house because of fear. I apologized for that and told him got good lesson for the future. Anyway directly he asked us to tell him about what we teach and without any fear my colleague and I told him about Saviour. It was incredible to see him happy to hear about J. We still don’t know what happened to him but totally unbelievable to see him trusty for the word. We even asked him to teach us something he know from Koran just to show respect but he said No…No today I want to hear what you teach me. Especially my colleague with his Koran knowledge thought him so many things and Jacob asked us to teach him more. You can see our stay was very exciting!!

Hard to tell all stories by email but my last story, we found another young man who knows J from before and leading small mosques in the village . His name is M. we are very excited to meet this fellow and we will disciple him and send him back to the village. The good thing is he can read and write very well, Also have some Koran knowledge and people in the village the recognize him as a “Rabbi” We are thinking after we disciple him we will send him as “village proclaimer” for that area.

I have no word to describe what God is doing. He always amazes me and do unexpected things. Thanks for praying and supporting for A. ministry now we are seeing God is moving among our people.  We expect from God big things. The fire is there, please pray the Holy Spirit to move in all dark areas and hearts.